The Difference Between Coercion and Inspiration 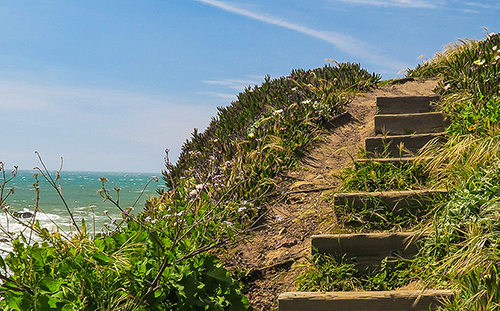 The first time I visited the Mayan ruins in Central Mexico, I gained a powerful life lesson about the difference between external coercion and internal inspiration. On that particular day, I had traveled to Chichen Itza with a small, loving, and tight-knit group of friends right around the Spring Equinox, at the precise time when the shadow of the sun creates a serpentine effect that slowly cascades, like a lovely gray waterfall, down the full length of the staircase of the Pyramid of the Sun. This beautiful, deliberately crafted serpentine effect draws many thousands of viewers to this pyramid during the spring equinox, because people come from everywhere to admire both the technical precision and the astronomical wisdom of the ancient Mayans.

I visited this pyramid because I too wanted to witness this serpentine effect. Yet before long, I began noticing how many others were scampering straight up the pyramid’s staircase to reach the open air platform at its pinnacle. The platform offered a magnificent, panoramic view of the entire excavated city as well as of the jungle that surrounds it, and I began to feel a powerful urge to climb those steps and claim that prize for myself. In that moment I hungered to prove to myself that I too was both brave enough, and capable enough, to ascend to that open air platform and drink in that glorious view. Of course, this particular stone staircase had been designed to service a much smaller human body type than that of a modern American. Each step offered no deeper a foothold than about half the length of my own (size 8) tennis shoe. These narrow steps came together to create a very steep angle that appeared more challenging to navigate the higher up someone went. I watched many surrender before reaching the upper platform, and I felt embarrassed for those who “chickened out” and came sliding back down in shame and out of fear. I felt determined not to become a member of that hapless, terrified group.

I then set out to make my own upward climb, feeling determined to match the courage and skills of the most successful climbers. About two-thirds of the way up, however, I began to feel nervous. I decided to glance back over my shoulder to reassure myself that I’d already climbed quite far in relationship to the seemingly endless array of stairs that still loomed ahead of me. Big mistake! Hit by a terrifying wave of vertigo, my entire body flattened itself automatically against the rough stone staircase. I grew suddenly aware of how far away the ground now appeared and of how precarious my skinny perch felt with my heels protruding out into open air. I could not bring myself to take another step upward; rather, I rolled over onto my back and awkwardly crab-crawled sideways until I reached a thick, helper rope line that had been installed nearby to aid people like myself. I then began to scoot back down the pyramid, sliding in humiliating fashion on my own butt. Tiny rocky step by rocky step, I worked my way down, sweating and struggling not to allow my fear to paralyze me entirely. And because I could see the faces of those ascending past me, as well as the faces of those on the ground who were watching and laughing at all of us “failures”, my humiliation in that moment knew no boundaries. At last I reached the safety of solid, flat ground once more. I raced away from the crowd that stood gathered around the pyramid’s base, fighting back hot tears of self-condemnation that had been triggered by fear and failure.

A heavy sense of personal failure weighed on me for some time after that painful experience. I wondered about my own apparent weaknesses. I even scolded myself rather cruelly for looking backward into the abyss during my ascent. I had chosen to ascend knowing my own susceptibility to crippling vertigo, therefore knowing that the abyss (and my longstanding fear of falling) would loom ever larger and exert a greater pull on my psyche the higher up I chose to climb. And yet I both attempted to climb the pyramid without being fully prepared to do so, and I still opted to look back even knowing what heights do to me. Why? What had happened here to create conditions that made it more likely I’d fail than that I’d succeed?

As more time passed, I began to wonder how much of my determination to ascend the pyramid rose from my having watched others succeed (and therefore wanting to be seen by those others as equally brave and capable) versus how much of it rose because I felt brave and capable inside of myself. I realized then that the eager crowd ascending around me may have generated within me an ego-driven (externally coerced) impulse to accomplish more than I truly felt ready, willing, or able to achieve. Perhaps my own egoic self-posturing compelled me to behave in a way that I had not fully prepared myself to act, and thus ensured my own failure. Clearly, my externally-motivated impulse did not align with my lack of mental readiness, my somewhat unsteady emotional state, or my lack of physical preparedness at the time. I had not failed to ascend because I couldn’t possibly make the climb; I failed because I had not been inspired internally to prepare myself in the way I needed to prepare myself so that I could achieve the objective.

Some years later I returned to central Mexico with another small group of friends. This time we visited Coba, a newly discovered Mayan ruin that has barely been excavated and that very few people as yet take time to visit or explore. This time, we arrived during the off season and found ourselves quite alone at the base of Coba’s grand Pyramid of the Sun, just the six of us. Coba’s grand pyramid, for the uninitiated, actually rises higher from the jungle floor than does the Pyramid of the Sun at Chichen Itza, which means its staircase rises even steeper, narrower, and longer than does the staircase at Chichen Itza. Additionally, no real effort had yet been made to make the Coba climb easier for visitors, making this entire experience feel very different from the one I had experienced at Chichen Itza. This time, no ego-driven external motivation rose to grab my attention and push me into doing something I did not feel inspired to do.

What did arise? A simple, internal wondering: How far might I be able to ascend this new pyramid if, this time, I simply took the process one thin step at a time, while relaxing and letting go of any concerns I might feel about who among us might make it up and who might not. What if I decided not to look behind me until after I had already climbed as high as I felt willing to go in the moment? What if I measured my “success” not based on some visual reward that awaited me at the top, but on how much better the experience might feel if I made this new attempt with intentionality rather than from an agenda? What might I accomplish once I relinquished the idea that I had to reach some final destination, and instead embraced the simple challenge of just being a bit less afraid, a bit more open and willing to take it one simple step at a time, as I ascended?

From that clearer state of not knowing yet wanting to find out, I found myself beginning to ascend this new pyramid. But this time, I made it all the way to the top without giving up or looking down. And from the top of that pyramid I indeed experienced a sense of raw joy as I drank in the profound beauty of the many mounds, both excavated and un-excavated, that dotted the vast jungle floor sprawling out beneath me. In that moment I felt what can only be described as pure contentment. Not arrogance or humiliation, for I felt not at all concerned about how others might perceive me or my struggles. Aware that I had challenged and overcome my own inner fears about (and for) myself, in that moment I felt utterly…alive. Present. Whole and capable, and in love with life’s infinitely creative process of eternal becoming.

I won’t deny here that getting back down those spooky, skinny, very steep stairs felt every bit as challenging as I expected it to feel. I slithered back down the same way I’d once abjectly descended from the pyramid steps at Chichen Itza—on my backside, one awkward sliding motion at a time. Yet the view from the top had intoxicated my senses. My heart still sang to know that I had found a way to achieve an internally-inspired longing that had nothing to do with “showing off” to others, and everything to do with testing myself by employing a better process this time around. And my mind rejoiced in the realization that how “I am” ought never be assumed, or fixed, or solidified—most especially not by me.

Through that experience, I discovered that I contain within me full access to the vast, living power of inspired insightfulness. The powerful energy of inspiration, which always arises from within me, compassionately encourages me to find the wisdom and grace to change myself whenever I feel stuck. It invites me to explore new ways to overcome whatever challenges may arise in my life. No more do I rely upon others to goad me into changing how I am. Rather, I look to others from time to time to demonstrate what can be achieved in this world. And from there, I remain free decide whether I too feel inspired to do the same as those others who went before me, or whether to try out something more suitable for me and discover what that brings. I have come to appreciate that “failure” describes an experience I have entered into because I felt compelled by external pressures to have a given experience. And I now realize that waiting for inspired insights to impel me—rather than relying upon external pressures to compel me—increases the likelihood that I can overcome whatever challenges presently lay before me.